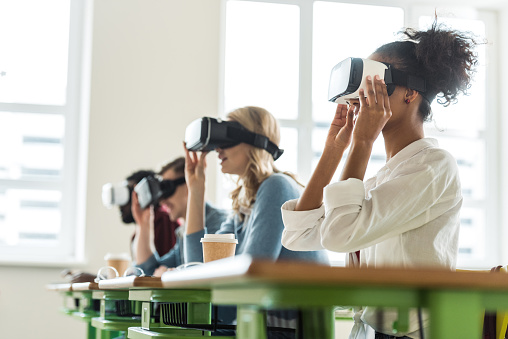 In May, the national centre for AI in tertiary education went on the roadshow for Bodyswaps. We visited:

Bodyswaps are the creators of VR (Virtual Reality) and AI (Artificial Intelligence) experiences. Bodyswaps use VR and AI to empower learners to practise and develop their soft skills through empathy and self-reflection. Our roadshow aimed to offer students the opportunity to trial the Bodyswaps software and share their opinions on the feedback the software generated. Further, we wanted to understand the integration between AI and VR.

On the day of the trial, each cohort of students would receive a presentation on what to expect. We would explain Bodyswaps and the four modules within the Job interview simulation:

It was essential at this phase to explain to the students that the answers they gave during the training would not be accessible to anyone. We had to explain that the coaches within Bodyswaps were not real people in a different room listening to them and judging them. It was clear that psychological safety was especially important to the users. Talking to the students about how AI and VR integrated to give them the experience helped settle the students’ minds. We then spread them out in a large room to create distance between students and supplied headphones in hopes of increasing psychological safety.

With every institution we visited, the first reaction from students was excitement. Although some students had experienced VR in their personal lives with video games, the vast majority had not. Both groups were equally eager to jump into the virtual world. A few students joked about wanting to stay within VR forever. Staff members shared the same enthusiasm. One thing is clear from this roadshow. Staff members are eager to find new ways to keep students engaged and improve the student journey. Staff members shared the challenge they face with the ratio of staff to students, which impedes their ability to support every student meaningfully. They were eager to see the results of this.

A large group of students found the modules helpful. They proclaimed how their confidence levels increased, they understood which skills they had and which skills they needed to improve on. The modules were able to engage students and keep them focused on the task at hand because they were not able to see their friends and get distracted. On occasion staff members shared how impressed they were because there were a few challenging students in the group who caused concern, but they engaged and had no issues. It was easy for students to navigate through Bodyswaps, and they rarely needed our intervention.

The general feedback we received was positive. Users said the training allowed them to think of things they had not thought of before. Like their non-negotiables, factors they would consider a must or must not exist in order to accept a role. The body-swap aspect (where you give an answer and swap bodies to listen back) was particularly interesting. Users appreciated the opportunity to listen to their answers back and reflect on how they would change their responses. However, some users focused on the fact that the avatar did not look like them, but I will come back to this later.

Bodyswaps have put a lot of work into its accessibility and a good thing they did as it is preferable. There was a healthy number of students who although eager to use the VR headset found it a little uncomfortable on their eyes or head. We were able to allow this opportunity to those students through laptops and iPads instead. Although they lost the VR experience, they were still able to train their soft skills and receive feedback.

This level of accessibility is extremely helpful because it allows users to practise in their own time on their phones, laptops, and iPads. Users would not have to wait to meet with a staff member to use Bodyswaps.

User reactions to the Modules

During the training, users are expected to speak so they can receive feedback on their answers, of course, they can always opt to skip this part but then they would not receive the same level of feedback.

Managing anxiety was the most tried module. At the beginning of this blog, I highlighted the need for psychological safety. This was one of the modules that caused a lot of reactions. Within that managing anxiety module, some users found the techniques to be helpful. They stood up in the room to practise their power poses (a technique within Bodyswaps to increase confidence), it was almost heart-warming to watch. However, others shied away from this activity for fear of looking silly in front of people. If users were in individual pods, this module would have been better for users. Individual pods would have allowed them to speak and move freely.

Some users had more prominent anxiety issues. They felt it stressed them out even more because they wanted to do well. On occasion, I had to pull users out of the simulation and practise mindful breathing with users to calm them down.

The second module ‘Landing the perfect job, on your terms’ also had an interesting effect on some users. Many found it helpful to think about their strengths and weaknesses. There were a few who found those exercises triggering. This was also a module that required me to take some students out of the training. In one instance I had to walk a user outside the room to calm them down and speak to them about identifying their strengths and weaknesses. What this highlighted was that Bodyswaps should not be thought of as a stand-alone training method. Rather, something that staff can integrate into existing methods. There will always be a need for human intervention when it comes to training students.

As mentioned earlier, users found the body swap aspect helpful but struggled with how their avatars looked. Bodyswaps has around 6 avatars users can choose from to represent them throughout the training. Yet, some users expressed they didn’t feel represented. A ‘build your own avatar’ option could be implemented. Of course, then you run the risk of users spending more time creating their avatar than anything else. If you ever played sims or created an avatar in Wii, you can sympathize.

There are a few aspects of Bodyswaps that can be enhanced to make the user experience more pleasurable. Overall, Bodyswaps offers value to users in the feedback that it offers and probes users into thinking deeper about themselves concerning the job interview process. The roadshow confirmed that Bodyswaps was not meant to replace the career services or staff member support. Rather something that can be integrated to support students further in developing their skills and improve the student journey.